After receiving a sample of the SABFoil Moses W950, the long-awaited smaller sibling of the very popular W1100, we had the chance to try it on last Friday.

The conditions were quite sketchy. The North/Northwesterly wind was pretty light in the inside, around 6 to 10 Knots, but moderate to strong on the outside, easily topping the 27 Knots. As for the waves, they were in the chest to solid overhead range. 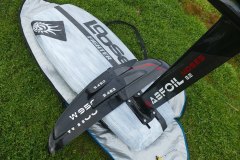 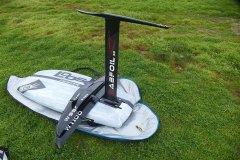 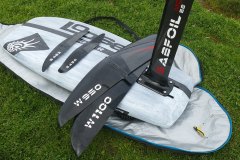 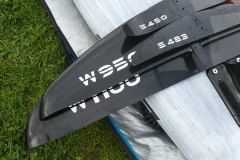 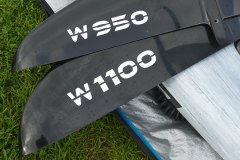 Unfortunately, the carbon stick of the harness mount of the action-cam we were using (the Insta360 X2) got broken right after the launch so we just have a few pictures (video clip frames, actually) to show. We do have the clip of the launch though and, as you can see, it was tricky. Overall, the session turned out to be intense yet fun.

Thought you might be interested in a comparison between the W950 and the W790 so there we go.

Lift: excellent. the W950 is at least on par with the W790. As you can see from the clip, we almost managed to get going in the inside in pretty light wind.

Speed: excellent. Again, we have a close call between the W790 and the W950 in terms of speed, with a slight edge for the latter. Next time we’ll be wearing GPS devices and put both the foils head to head in order to better compare their speed.

Stability/Control: another close call with the W790 when it comes to control. One thing is for sure: the W950 is more stable than the W790.

Pumping/Gliding: not that the W790 is not good for pumping, but the W950 is apparently better. As for its gliding capabilities, obviously better because of its higher aspect ratio.

Pop: pop is great and, like the W790, makes the W950 an excellent foil for Wing Foiling freestyle.

Breaching (overfoil): like the W790, the W950 is not particularly prone to breaching.

First impressions are very, very good, even though we’ve spent just a few hours with the W950. Like we said, we used the W950 with the S450 stab and its performance could be even better with the S483.

However, it’s quite apparent already that the W950 is a super performing foil and an overall better choice for waveriding/downind/fast freeride compared to the W790. Finally, the fact the W950 is a scaled-down version of the W1100 makes it the ideal companion of the latter.

WING HARNESS BELT, The First Ever solution for Wing Foiling on the Market!